Belly, the Palestinian-born Canadian rapper, songwriter and record producer, has worked on countless hits, including this past year’s global smash hits “Blinding Lights” and “Save Your Tears,” both by The Weeknd. Past hits include “Earned It” (also cowritten with fellow Canadian artist The Weeknd), which was nominated for an Academy Award, a Grammy, and an iHeartRadio Music Award in 2016, the same year Belly was honored as songwriter of the year by the Society of Composers, Authors and Music Publishers of Canada.

Belly was resettled to Ottawa as a child, embarked on his music career at 16, and reached No. 1 on MuchMusic’s video chart at 23. He went on to create hits with some of the biggest names in music as well as release his own acclaimed albums, with his upcoming album on Roc Nation slated for this summer. The International Rescue Committee (IRC) spoke with him about his experience.

I was 7 years old when we got to Canada. My father had been there for about a year, getting things ready to bring the rest of the family out.

Canada was a completely different world [from the West Bank]. It was the first time I saw a microwave … I thought it was some alien technology. Canada was open to immigrants and refugees, so I got to meet a lot of kids my age who came from similar situations in similar regions. I think that kind of comforted me and kind of guided me to learn how to become part of something that I never knew about.

Can you talk about how your journey has influenced your music?

My past is in my music.… My earliest memories of music were in Jordan. I was probably, I want to say, 3 or 4 years old. And my uncles and aunts, everybody, would go on the roof. And my uncle would start playing the drums, another would start singing, and they would all be freestyling. The thing that intrigued me was, how are they thinking this fast? How are they coming up with this stuff so fast? So the first thing I did when it comes to rap was freestyle. I wanted to do what my uncles did. That turned into a love for words and poetry. I still remember those nights … that rooftop was the only world that existed to us at that moment.

When I came to Canada, the English language was like a vessel. It was something that I could use to describe certain things that I felt I couldn’t use my native tongue to describe. English allowed me to open up other doors, first as a poet. My love for rap came after that. It’s really a love for everything involved with music, from the words to the melodies and, you know, to the memories I have.

If you’re thinking about 3- or 4-year-old Belly and his family on that roof, what words come to mind?

Happiness, a true love. I think a lot of courage comes because a lot of us move in units. We're family first, and we're going to move like a unit and we're going to do whatever we’ve got to do to make sure our family members make it before we do. And that to me is the real love that I got. And that's the most real love I've ever gotten in my life.

What is the process of writing a song like for you?

Sometimes the melody will come first, it’s gonna inspire some words, or vice versa. Sometimes, you know, one or two of my producers will play something that will inspire a whole night of writing. I try to change my approach every time.

My first love is writing. I'm a poet … I mean, I consider myself one. And my second love, obviously, music—rap music, first of all, but R&B and so many other forms that inspired me when I was young. I wanted to emulate everything that I heard and saw, whether it was Kurt Cobain, or Biggie, or Snoop Dogg. I wanted to make songs that impacted people the same way those guys impacted me. I listened to so much Snoop and Big that it was like they were my English teachers.

I think finding the courage to be myself had to come through the music and the writing.

I think finding the courage to be myself had to come through the music and the writing. That’s what helped me break the walls down … like, okay, maybe I do have something to say. Before that, I thought there were only my own problems. I didn’t really understand that it’s all such a universal thing, that people go through the same things.

You just mentioned courage. That’s so central to the immigrant experience.

For a lot of us, it’s hard to sit down in a room and tell people your problems, tell people your issues, things that are affecting you and stuffed inside. It takes a brave person to be able to say, “Hey, look, this is what’s on my plate.” For me, at first, I couldn’t find that voice, I had to sit on the side,

write things that needed to come out. I needed to say these things, but I didn’t know how.

That was my way of being able to get those things out, and to give myself a certain type of therapy that I didn’t even know I was giving myself. It didn't matter if I was writing something that someone read, it was helping me want to keep going.

Is this why you work with the IRC, to share your experience with others like you, so they realize they are not alone?

Refugees and immigrants go through a lot, just to make it somewhere they can feel safe and secure. For me, that’s one of the most beautiful things, to be able to help people, just to be involved. An organization that has this in mind, that’s dope for me.

Refugees and immigrants go through a lot, just to make it somewhere they can feel safe and secure.

I am watching real change happen in real time. I want to be a part of that change. I want to do whatever I can, join forces with the IRC, give back because, like I said, a lot of us have been in some crazy situations. And sometimes all it takes is just a little help.

What is your advice to young immigrants or refugees starting over in a new country?

Today’s Belly would tell 7-year-old Belly, “Everything is gonna be good. It’ll be alright.” That’s literally what I would tell them. There’s a lot of fear and worry as a kid in a new place, you’re not around your friends anymore. I’d say, “It’ll be alright, buddy.” I wouldn’t give them the keys or tell them the codes. I'd make them go through everything as I did. But I’d tell them, “It’s gonna be alright.”

Get involved on World Refugee Day 2021 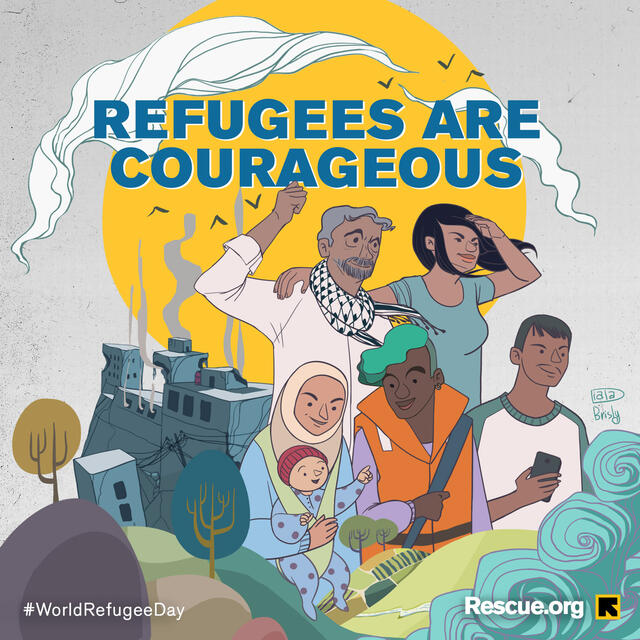 It takes great courage to start over, uncertain what the future will hold.This World Refugee Day (June 20), we are celebrating the courage of artists who've had to leave their homes and begin anew, and who now use their creativity to connect, heal and bring us together. They inspire us and shape their communities for the better. Learn more and take action at Rescue.org/Courage.